Peru: August 15, 2007 – Following the 2007 8.0 earthquake in Peru; Dr. Steve Mora helped to organize a fundraiser to raise money for the victims in the city of Pisco, Peru. The fundraising event help raised enough money to start building the school.
Musicians, singers and the best guitarists of Peru, gave the framework of this Peruvian event and contributed to its success. The activity director Eddie Mora and his brothers Dr. Steve Mora and Ferdinand Mora, along with Dr. Bill Schultz, were very optimistic to contribute to this event and to help support the victims of the 2007 earthquake.
The goal was to build a school with 10 classrooms and recreation areas in one of the worst affected areas of the city of Pisco. 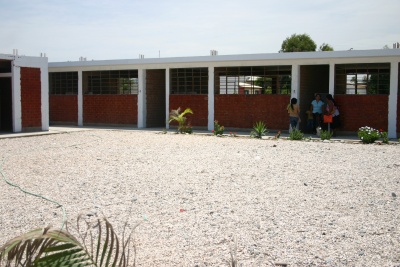 This new school in Peru was made possible with the
support of Dr. Mora and the AIPEEUC Organization